The newly renovated Eagle Performing Arts and Conference Center first opened in December of 1939 as a movie house. Its first movie was The Wizard of Oz.

After many successful years as a movie theater it was home to an indoor paintball range as well as an indoor skateboard park.

When the City of Pontiac purchased the building they took proposals for what to do with it. A local theatre troupe proposed the idea of a dinner theatre and the Eagle Performing Arts and Conference Center was born! 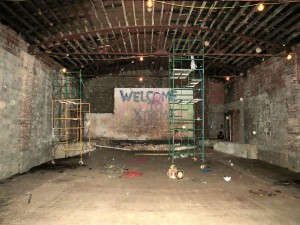 Since its re-opening, the Eagle has hosted dinner theatre performances, comedy nights, concerts, wedding showers, lecture series, family reunions, and so much more. It was also the site of the Society of Gilders 2016 Community Project. Gilders from all over the world came to Pontiac to gild the details on the proscenium arch as well as around the doors in the lobby. While they were here they also worked on some projects for their museum just a few blocks away as well as an art car that sits outside downtown during the summer months. The Eagle was open the whole time they were working and community members were welcome to come observe and in some cases even help out! It turned out beautifully, and we are so proud to have the hand gilded details gracing our building!

The Eagle is available to rent for any number of public and private events and performances, we would love to work with you to bring your event to life!